Now that our Halloween calendar extravaganza has ended, we’re back to our regularly scheduled program. I’ve taken over Monday’s so I can do an actual Mary Monday rather than Mary Monday, um, I mean Wednesday.

This week’s Mary song is Mary, Mary by The Monkees. I loved watching Monkees reruns when I was a kid. Although I loved guys with accents even way back then, my fav Monkee was Mike Nesmith.

And your famous Mary for the week is Mary Mallon, otherwise known as Typhoid Mary. 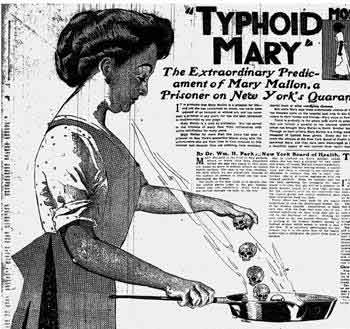 Love the image of the skulls going into the frying pan

She was the first person in the United States to be identified as a healthy carrier of typhoid fever. Over the course of her career as a cook, she is known to have infected 53 people, three of whom died from the disease. Her notoriety is in part due to her vehement denial of her own role in spreading the disease, together with her refusal to cease working as a cook. She was forcibly quarantined twice by public health authorities and died in quarantine.

Geez, only three people died? I thought it was so many more.